How Genetic Genealogy Is Changing the World of Cold Cases

When Joseph James DeAngelo, AKA the Golden State Killer, was finally named and apprehended thanks to a new technique known as forensic, or investigative, genealogy, both law enforcement and civilians got a stunning preview of how the science could reshape the crime-solving landscape.

Since DeAngelo’s arrest in April 2018, over 400 cold cases have been cleared using forensic genealogy with newly solved cases hitting the headlines week after week. While genetic genealogy got its start as a way to help adoptees find their biological families, or for the average person to learn more about their health and ancestral history, it has now expanded into a new—and sometimes controversial—crime-solving method that could help thousands of families get the justice they’ve been waiting on for decades.

Traditionally, suspect DNA profiles have been uploaded to CODIS (Combined DNA Index System) in hopes of finding a match with a known offender or to link an unknown offender to multiple crimes. But the catch, of course, has always been that the offender must be in the system already. With forensic genealogy, the unknown assailant can be found by building out family trees from unknown DNA simply by using existing and available genetic profiles of (often distantly related) family members. From there, a suspect pool can be generated and tested against the unknown profile until the perpetrator is found.

Another Tool in the Arsenal

Civilians and juries may think of DNA and/or forensic genealogy as a magic bullet, but law enforcement understands that getting to trial and closing a case requires so much more.

As was the case with the Golden State Killer, genetic genealogy was crucial in finding DeAngelo (his name had never come up as a potential suspect), but the clincher came after he was in custody.

Left alone in an interview room, with cameras and microphones rolling, DeAngelo began talking to himself and investigators heard him mutter, “I did all that […] I did all those things. I destroyed all their lives. So now I’ve got to pay the price.” DNA might have got him into the interview room but it was his recorded confession that sealed his fate. 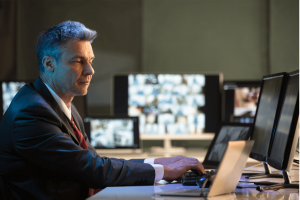 Learn more about Onyx by CaseCracker

Onyx is great for small and medium sized departments, but has been intentionally developed to scale up  to the large scale, enterprise agencies as well.

While forensic genealogy is rife with possibility, it is also very much dependent on the public’s participation in order to reach its fullest potential. As with any new technique—especially one that requires such personal information—there are privacy concerns and worries about how exactly such data could be used in the future. However, interested parties can choose to share their information with an open-source, third-party website such as GEDMatch which allows users to “opt-in” their DNA for use by investigators looking to solve cold cases. All a participant needs to do is upload the raw file of their genetic information (obtained by taking a test through a private company such as 23AndMe or Ancestry) to GEDMatch. From there, investigators can upload their suspect profiles to build out their family trees using this volunteered data.

unsolvable. Take for example some of these formerly ice-cold cases that have made headlines in recent years:

· In June 2021, Montana law enforcement used genetic genealogy to close the books on a 65-year-old double murder of a teenage couple, making it the current oldest case in America to be solved that way. The connection was made by building out a family tree from the suspect’s DNA obtained from a single sperm cell.

· In January 2022, Colorado police made headlines after solving four homicide cold cases involving the stabbings of three women and one teenage girl from 1978 to 1981. All were linked to the same perpetrator who had taken his own life 41 years prior.

· In November 2022, forensic genealogy led to an arrest in a 35-year-old sexual assault case involving two children ages 11 and 13, expanding the value of the technology beyond murder investigations and into apprehending a range of violent perpetrators.

Giving Names Back to the Nameless

Another valuable application of the technology is how it can help identify John and Jane Does. Organizations like DNASolves and the nonprofit DNA Doe Project both use forensic genealogy to give names back to unknown decedents, giving peace to families mourning their missing as well as finding their loved ones’ killers. The DNA Doe Project relies on all-volunteer research teams committed to leaving no Doe unnamed due to an agency’s financial or other resource limitations. DNASolves is a unique resource that relies on genomics, crowdfunding, and volunteered genetic data to solve a variety of cold cases as well as identifying Does. The DNASolves database is purpose-built for law enforcement and used exclusively by law enforcement to aid in the investigation of violent crimes. Individuals can either upload their existing genetic profile to the database or request a cheek swab kit to submit their DNA directly to DNASolves. This option doesn’t offer ancestral or health insights, but the limited and secure use of the data may offer peace of mind to those with concerns about sharing their genetic data too far and wide.

As if the value of forensic genealogy in solving cold cases and identifying remains weren’t enough, it is also a proven way of exonerating the innocent. Back in 2019, Christopher Tapp had all charges against him dismissed by a judge after genetic genealogy cleared him of the murder of 18-year-old Angie Dodge. Tapp had already served 20 years in prison after giving a false confession. Not only was he given freedom, but the young woman’s real perpetrator was found and brought to justice. In 2020, a California man was exonerated of second-degree murder after being wrongly convicted back in 2005, again with forensic genealogy identifying a new suspect.

With so many applications—whether it be clearing cold cases, providing closure to the families of the missing, apprehending violent sexual predators, or even exonerating the wrongly convicted, forensic genealogy is proving just how versatile and valuable it can be as a crime-solving tool. Now all that’s left to do is advocate for the public’s participation by appealing to their desire to see justice prevail.

Five Ways to Better Connect with the Community You Serve
Pro Tips for Designing Your Interview Room
When “Why Record?” Became “What to Do with All that Footage?”
Eight Things to Consider When Setting Up Your Interview Room
Avoiding Costly Lawsuits Through Recorded Interactions

Fill Out Form To Get Whitepaper

Please out the fields below to view our paper instantly.